Thursday, the penultimate day on camp is always one of the toughest since by this point in the week with long training hours coupled with early morning wake up  calls, most people are beginning to feel tired – and then we get them to do two races!

We start with the swim race – two laps around our set of buoys with a beach run in between. When we saw that the tide was low this morning  (weird!) and the water very calm, we already knew that the handicaps might be a bit out – those factors always does make it tricky to get swim race handicaps quite accurate and coupled with ability to sight and swim a straight line often results in one or two people with really huge advantage due to improvements in these skills through the camp, different layout of the course enabling easier sighting, and the inclusion of a 150m beach run. Simon, who had probably swum about twice as far as everyone else in the aquathlon, had such a lead that he was diving in for his second lap before the last few off had even been started! Mel normally manages to swim through the field for a close finish, but this year her handicap was so great, on a course shorter and calmer than predicted, that she did not stand a chance of doing that! However, aside from these outliers, the middle bunch of 10 of us all finished within a minute…so for the “average” swimmer, we feel that it was a fair race. It certainly was a hard fought race – as is always the case once the handicapped start system in in place where faster swimmers have to chase, and slower swimmers are chased to be the first on out of the water. Seeing the number of collapsed rubber-clad triathletes lying in the sand at the end of the contest, I once again was impressed at the effort people will put into these races, despite their late -camp weariness! 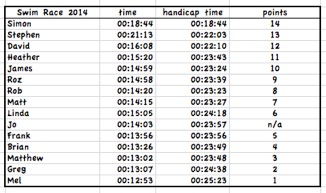 Simon won on handicap by such a margin that he felt too embarrassed to accept the win, and Stephen in second place felt the same…so the prize rolled down to David, who will now be the owner of a cool Blueseventy swim suit for finishing third.

The bike routes are relatively short today ( 60-90km) but include the climb up the short but very steep slope of Femes, to make it “interesting” . It’s that sort of 20+% gradient which is challenging no matter what gearing you have fitted for the hilly week – and I’m sure that everyone approaches it with at least a  some degree of fear of failure – but most of us couldn’t even imagine it would be possible to get up it in the “big ring” . Matthew was taking cash bets that he could…and to our amazement ( and certain amount of horror!) he did it, possibly the hardest €40 he ever earned? His quads continued to twitch, as we cheered every one up the last part of the hill, and celebrated over (more) coffee and ice cream in the cafe at the top. Ride leader Emma, who organises several high-profile cycle events and races back in the UK, has offered up a prize of an entry to Mills Hills – a challenging sportif event in Yorkshire – to the camper with the mist ascent logged at the end of the camp. The guys in my group might be glad that i “encouraged” them to ride reps of Femes today whilst waiting for the other groups to arrive after all…

We arrived back at the hotel with about an hour to spare before setting out for a group outing to the beach front in Puerto del Carmen and our final points race of the camp – the handicapped “guess your time” 10k race. The guess-your-time element is for a bit of fun, but also serves as a little demonstration in what you really can do when in the right environment and with sufficient motivation – people are almost always massively pessimistic about what they’ll run when they base their guess on how their legs feel, rather than having confidence in their endurance. Of course there are always a few exceptions, usually coming fro those who went super-hard on the aquathlon early in the week, and continued to crank it everyday on the bike – 10km in the heat of the afternoon sure feels like a long, long way when “the wheels have come off” (or even if they haven’t for that matter!) – however the 2 lap out-and -back run enables us to see one another, targets or pursuers, at several turn -around points, and everyone offers up lots of encouragement which makes it more fun. I was placed pretty much in the middle of the rankings, with Brian 2 -seconds behind and Greg 17 after him. My strategy was to run as close to flat out  as my legs could manage for the first 1km or so and hope that they did not have the nerve to come with. At the 2.5km turn around, I saw that this had worked, and I was also gaining on those ahead. Steven egged-me on by suggestion that I could actually pass everyone and win the race..but I was most concerned  to stay in front of Matt who appeared to be closing in on me every time I saw him! It was a hard run and I’m pleased to say that in the last few kms I seemed to get a little more lead over him…however since he did pass everyone else for second place, he once again takes the win.

The prize for this is a pair of Vibram Five-Fingers from our sponsors Primal Lifestyle – this will be a new experience for him, but asa  light footed runner in minimalist shoes anyway, I’m sure he will enjoy them.

For the fastest athlete to win on handicap is a true demonstration of a depth of talent, an ability to judge his efforts just right, and to “bring it” when  in competition calls for it. Matt has impressed the whole group, and most especially me as his coach, by doing just that this week.

However – his 10k time prediction was pretty appalling, being over 2minutes on the pessimistic side!

Best guesses of the day were from Heather and Brian – both just 5 seconds off their actual run times. That’s the closest that anyone has ever predicted, and for two people to do so is quite amazing really. Fortunately, TenPoint Triathlon have given us two prizes to offer  – a running technique assessment and coaching session and also a pedal spindle fitting session so we are able to award prized to both of them :o)