This morning we swam our new “point to point’’ route from Playa Chica around the small headland to the main beach and the Ironman start. It makes a nice change to do this, and some of us decided to swim a little longer and do the out and back swim twice. 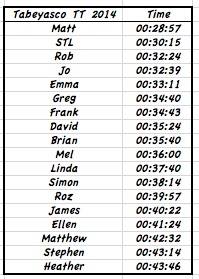 The main feature of the day’s ride is the first of our handicapped races, three of which in total (a swim, a bike and a run) contribute points towards the overall camp prize, and the famed Tabeyasco hill climb. At just under 10km and 500m ascent, the ascent up this valley is relatively sheltered until the final 3 km of switchbacks to Mirador del Haria, and times range from just under 30 to 45 or 50 minutes. Despite slightly windy conditions today, we had a feeling that Steven’s previous camp record might be broken today – Matt has demonstrated that he can ride a bike fast enough around a “sporting’ time trial course, and with the small frame of a climber, mountain stages almost certain to be his real strength! We started in reverse order of the El Golfo TT, with gaps of either 30 seconds, 1 or 2 minutes (according to approximate handicap) the idea being for a pretty compressed finish if not a true “race to the line”. With Sarah out in the van and once again on hand to help with timing, this was the first time both Emma and I were able to do our TT’s within the race – we first met racing each other up hills during a very wet race at Wensleydale triathlon and have been doing so ever since. I know I’m in very good form if I can keep up with her, so the agreed order was me first to act as bait for her to chase…and really I felt it would be a case of just holding her off for as long as possible, and then trying not to loose too much time. Half of the group had already started by the time we set off, so there were other targets for me to pick off – as well as the knowledge of  the faster riders chasing from behind, but not being beaten too badly by Emma was my prime motivation. There were WonderWoman pants at stake! The slight head-wind played in my favour today, and by riding most of the ascent low down on my aerobars, I found that not only had I held her off all the way to the halfway mark, but seemed to have actually increased the gap a little.

I got a little surprise from Linda as I passed her and she put up a bit of a fight by over taking me again a few hundred meters later. Linda is a remarkably stronger athlete since we first met her on camp last year, and in particular on the bike. I’m sure that she’ll go well at Los Cabos in a few weeks time with a really smart recovery period after this camp. I certainly hope that this camp week has given her some confidence in her ability and her form – her  Tabeyasco climb was a huge 7 minutes faster than last year, and in tougher conditions.

Matt was good for the expectations on him, posting a new Camp record of 28:57 that will be tough to beat, with Steven second fastest and a little of his own previous best from last year. The battle between Greg and Frank continues on the bike, and I am pleased to say that I got to keep my pants, and can wear them with pride :o)

Having cheered everyone in over the top, we all did a quick change into run gear for a “special feature” run – an optional loop around the observatory at the top of Mirador de Haria. Not an easy brick run, but well worth it for the amazing views down the valley to the plains and coast below, not to mention a unique sort of a training session! Recovery was sought in the form of coffee, cake, ice cream, more cake and more coffee and another ice cream…before group photos and easy riding on the way home.

The actual winner on handicap was Ellen, who rode proportionally faster up the climb than her El Golfo TT and held all attackers off!  This is what we love about  the handicapped race format; it can be won by anyone – outright speed is less important than consistency and bettering your own performances. Due to the difference in distance and ascent of our courses,  handicap times are calculated off the averages from the two bike events and are as shown below. 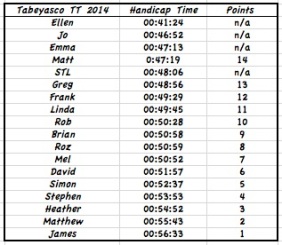 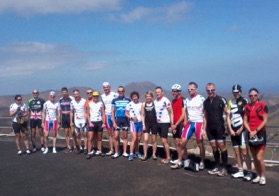 Camp staff are not eligible for camp prizes and camp completion to date is also a requirement or competition winners. Therefor, Matt, being second best on handicap take the prize of a Freespeed bike fitting from Ellen – who happens to be his partner, so at least it “stays in the family”