Well, here we are already, the final day of camp. The schedule for the day is to ride the Ironman route ,and this tough 180k ride is classed as a points competition, in that the whole ironman route must be completed in order to satisfy camp completion. We encourage everyone to earn themselves swim and run wildcards the previous day in order to allow ample time to complete the routes, and be back in time to pack up bikes and enjoy an evening of socialising and celebrating the end of the camp. However, there are always a few campers who like to take the opportunity to complete a swim-bike-run day, and in the past we’ve had people swimming beforehand and then running up to 2 hours after their 8+ hour ride!

We split the camp into three groups: two doing the standard Ironman route ( with all the bits in and out of PdC to make the full 180km) and a group attempting the ironman plus ride – a 200+km ride that takes in both Playa Blanca in the south and Orzola in the north. That ride would take a relatively strong group, riding at a steady pace in the region of 8 hours plus stops, and to date has never been successfully completed on camp.

Emma lead a steady-paced group who’s likely ride time would be in the region of 8 hours and would therefor set off as early as the breakfast buffet hours allowed and would be aiming for minimal stops during the day, whilst I lead a slightly faster paced ride with the intention of completing the course at a “training pace” for the athletes who are signed up for this Ironman in May. The main difference in these approaches was that Emma’s group got round the course by working together as a group, stronger riders helping he others in the very windy conditions that we faced, whereas my group of 5 tended to ride a bit more spread out so that we could use our aero bars and practice pacing certain stretches of the course. Simon suffered a little for this on his road bike…and, as he revealed about 98miles into the day, being his first ever “ton”. We stopped to celebrate the milestone with a photo at the El Griffo winery – which we will all now forever remember as the 100 mile-mark on Ironman day. These little memories do help a lot when it comes to getting through the pains of race day :o)

As i mentioned – the conditions were far from favourable – in fact i don’t think that I’ve experienced wind quite as strong ( and cold) at the tops of Haria and del Rio, and the NNE direction meant that it was against us for most of the first 100km. We did, however enjoy a fast ride down teh LZ1 and most of teh way home.

Stevens group suffered a blow -out early  in the ride – and when i learned of this via a text message,  i assumed that the “curse” of the Ironman Plus had struck again. However, they just happened to be in a position where return to the hotel to change tyres required only a small detour – so whilst Matthew sorted that out, Steven’s posse enjoyed their first coffee stop of the day, in the cafe opposite our hotel! We had a few laughs when we heard the story of their being spotted by some of the hotel’s other guests who remarked; “ is this how far you ride???” They resumed their ambitious route and by riding as a perfectly coordinated bunch, managed to complete the 200km ride in 8 hours – arriving back at the hotel within 10 minutes of Emma’s group, as the sun was setting. Now, that’s making full use of a day !

Not content with 9 hours on the road, a couple of our veteran campers and endurance legends Roz aka the Duracell Bunny, and Linda, her equally unstoppable room-mate, donned run kit and headed out to run for an hour.

Bikes hastily packed and glad-rags brought out, dinner was a treat from the campers – and a cry for red meat – in a lovely local restaurant where we enjoyed simple but delicious food after a week of the “same old” hotel buffet with our multi-plated meals being viewed as little more than fuelling sessions!

We awarded the camp prize to a worthy winner, Matt. Rob managed second place, with Simon and Frank ted for third. We all achieved over 30 hours of training each – with a combined ascent of 173, 76m. The prize for most climbing on camp was awarded to Rob, who has also ridden further than any of us, with 10,940m over 775km in 6 days.

We are very proud of this great bunch of athletes – each with different strengths and levels of experience, but all here with the same “have a try” attitude, supporting one another through a challenging week. We’re always delighted to have people return again from previous year’s camps, but it’s especially  great to have new people come along and see what their “finest age-group competition” can, and will, during a focused and supported training camp. 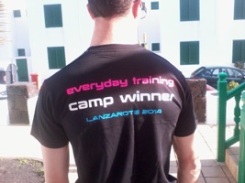 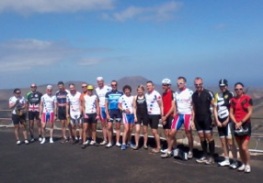