We couldn’t run a camp without including an aquathlon – and being based so close to Peurto del Carmen, we were able to use the same course that we have raced in all of our spring Endurance camps. But this time we added a twist and “calculated” handicaps for everyone based on a timed swim (from Sunday’s CP test in the pool) and a timed run interval (from yesterday’s hill repeats workout). The race was clearly designed by a swimmer; with a 1.3km swim followed with a 4.6km run, most athletes spend longer in the water than running, and his was even more skewed this year by a high tide and strong currents. Also, an ability to sight and swim a straight course plays a massive part in the outcome of this race…and as ever, those of us watching the race were table to see the athletes swimming in all different directions. This got to be quite a concern in Nigel’s case, who took off on a bearing to the far left, managed to miss the end of the continuous line of buoys that we use as the far turn-around- and continued swimming way out into the open ocean. Eventually common sense kicked in and he started to make his way back to shore….by which time most athletes were already well into their second lap. I made a judges decision and allowed him to swim a much reduced (and easier to sight) second lap in attempt to even out the racing, which looking at the swim splits did seem to balance his swim reasonably well. Once on the run leg ,there was in theory a good chance to the weaker swimmers making up a lot of time, and we saw great running by Daz ( for Marc, who cant run due to achilles problem) and Nigel, but neither could catch Alexei, who held them off with a decent run of his own and crossed the line in first place. It was worth noting that although Steven employed smart sighting –  by looking back to land features rather than trying to spot the elusive line of buoys ahead – and swam a very straight course, his swim time was still significantly slower than in previous years, confirming that sea conditions were tough today.

And our all-time top 10 leader board, below.  Note the lack of results from March ’12 in the top 10 – indicating tough conditions in that year too. 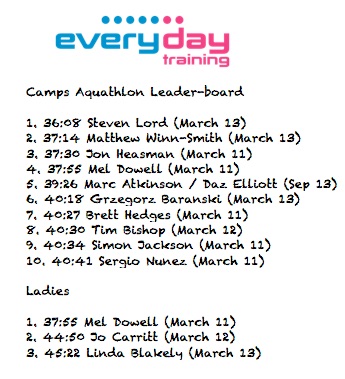 The day’s ride was the full Ocean Lava course – a 90km loop over all of the hills in the south-west half of the island, including the brutal Femes pitch. Although there were some terrific fast bits along through Le Geria and around El Golfo, due to the calm conditions, it’s hard to imagine actually racing through Las Brenas and up to the top of Femes. Whilst Steven took the advance party of Daz, Alexei and Andy G, the faster riders were stuck with me …and Marc and Andy B decided to make their ride a little harder by playing the Big Ring Challenge as far as the start of the Femes climb. Marc’s gym and high-torque training focus paid off, and  incredibly he managed to get all the way to the round about in the 52. It was a close call coming up the climbs from Las Brenas, and we had to give him lots of encouragement up there! 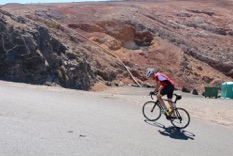 Once again, we managed to judge the difference in departure time for the two groups exactly right, so that Steven and Andy G were starting the Femes climb just as my group had all finished it..with Daz and Alexei soon after them. Debs had driven out to join us for the planned coffee stop at the top and took some fantastic action shots. After a long break which included coffee, ice cream, cans, more coffee and more cans, it was just 45km left of the course, over Fire Mountain and returning as per the full Ironman course down the “Donkey Track” to PdC. The headwind for this part made it a bit of a slog, but it might be more accurate to attribute that to a pretty solid week’s training, and certainly more than some of these guys who have not had a EverydayTraining Camp experience before are accustomed to.

We returned mid-afternoon, ate the amazing chocolate and “stuff” cake that Tri Sports Nick had prepared for us, and relaxed in preparation for this evenings end of camp “dance-a-thon”.