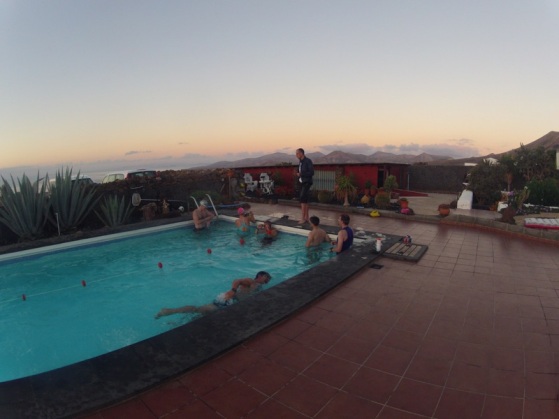 Day 1 Started with a swim, coached by Steven. The pool looked spectacular in the early morning sun, and 6 of us shared the two lanes with slightly differing sets according to swimming pace general endurance in the water. Both lanes undertook a Critical Pace test – the standard 400, 200, 100 meters time trials that this involves modified for the less experienced swimmers to include only the 200 and 100 TTs. It was amusing to swim in this long narrow pool – which is a full 25m in length but only a little over 2 standard lane-widths across, with high walls on each side. The effect of this is visually stunning, but creates a rather choppy environment with 6 swimmers going flat out! The consensus was that this probably effected swim paces by 3-6 seconds per 100m.  However, due to the nature of the Critical pace calculation, which looks at pace drop off over the varying distances, rather than the actual TT paces, the test is still valid – and certainly will be very relevant for basing our week’s swim sessions around.

The outcome of this test is very much effected by a swimmers endurance (better swim endurance results in less drop off in pace as distance increases, thus CP will be relatively close to 100m best pace) and over breakfast we agreed that it would be interesting to re-test this at the end of the camp after good week of daily swim workout, with coaches guidance on stroke improvement thrown in.

Mid morning we set off for a short group ride, 60km route out along the Ironman route to and around the beautiful El Golfo loop. For those who have never been to the island before, this 21km loop offers some great views of the unique Lanzarote scenery – and we got a little more than we bargained for courtesy of the fat naked family who’d parked their camper van at the side of the road and were in the process of unpacking the boot. Nice. The pace at the front of our group hotted up as Andy B decided to unleash his top end, and a few of the boys were unable to resist the challenge. Fortunately for those of us taking our time a little more, they had the coffees ready for us at the café in Yaiza. At that point we offered two options for either a further 30km loop home, via Fire Mountain…or to extend the ride for those who wanted to go longer. We split in half with Alexei Daz, Alex and myself opting for the shorter ride ( we have a long day planned for tomorrow, and for some, this amount of cycling is a real novelty) with Steven, Marc, Nigel and Andy “hammering” their way around their 90km loop by all accounts!

Meanwhile, our final camper ,Everydaytraining Camp veteran Andy G had landed and was being looked after by Debs back at the villa. Just as my group returned  he had finished assembling his bike, and joined us for another 10km “shake down”. This meant that both groups returned to the villa and sat down to a well earned lunch together.

Our afternoon run was another whole group session – an opportunity for me to show an easy to navigate (not so easy to run!) 9km loop, and point out orientation points and other run loop options on the way. The 30 degree heat, a solid bike ride and a heavy lunch made this run a little tougher than “easy” … the final 4km being all uphill, with an especially nasty gradient over the last 1.5km. This is where Steven, who’d been hanging back and running at a very leisurely pace up to that point, decided to make a move and encourage a race home. No one took the bait and to our amusement he was then committed to maintain that pace up the entire incline! It will do him good to put in a little effort every now and then…apparently he’d been hanging on Marc’s wheel for most of the second half of the ride ;o)

The final, informal, session of the day was Steven’s own swim session – since he’s coaching poolside each morning, this is his opportunity to train in the pool, and is open to those who wish to join him for the set.

It was a nice warm-up day and a good introduction to riding in Lanzarote, without too much wind or big climbs, and great that for the most part the whole group was able to train together.  We’ll split into at least two groups on the rides tomorrow, as it’s a long ride day with a few different options to cater for all.