It was a slightly earlier start this morning, and it was only barely light as we hit the pool for our coached swim session. The hour-long set included some warm up and drills then a 1600m main set which was designed around our calculated Critical Paces from yesterday, on long repeats.

We wanted to be out on the bikes as early as possible, as today the main session was a long ride – 5 hours around the north of the island. Our Russian camper Alexei is a runner and relatively new to cycling, rode with us for the first part of the route ,before accompanying Daz on a shorter route  through Famara and La Santa, and working on some bike skills. For the rest of the camp, the planned route offered some views of the most scenic part of the island as well as a taste of the most iconic part of the Ironman Lanzarote route for the benefit of Andy and Nigel who will be doing the race for their first time in 2014. It also offers some good practice riding up hills in the heat! The lighter winds are a blessing, but do make for a hotter ride, and we had to stop frequently along the way. A longer ride option was offered for those who wanted  – and with Andy G, Marc and Steven all preparing for late season Ironman races, the aim was to ride 100miles at least. The group was feeling well at the halfway point…at which point it appeared that everyone was keen for the longer ride option. So…without need to split the group, the original planned route was abandoned in favour of a route which added an ascent of Tabyasco. Logistics were complicated slightly by Andy G’s boss who pays him a lot of money in return for a weekly 1 hour conference call, every Monday at 1pm without fail, and this one was taken from a café in Arrietta mid-ride! We enjoyed some nice orderly chain-ganging along the coast road from Orzola to Arreitta where we dropped Andy off  – the rest of us would do loops of the climb from Tabyasco to Mirador del Haria and back until he was done!  However, after the first ascent up “Tabyasco” it was remarkably easy for me to persuade Alex, Nigel and Andy B that a 50km “descent” back to the villa was preferable to the rest of the afternoon spent repeating that climb…and I believe that by the time we got home, hot and tired by all the climbing everyone felt that they’d made the right choice! This was confirmed when we sat down to a lovely lunch and pretty much all thoughts of that run off the bike dropped. However, Andy B was keen for a seas swim ,and took himself off on the short down hill dash to Peurto de Carmen for a dip  (and a cab home! ). Alex got himself back into the pool to work on some of the technique drills that Steven had shown him, aided by Daz. 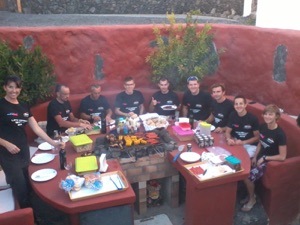 Whilst the BBQ hotted up for our dinner, we waited for the return of out long –distance cyclists, who were much later home than expected. They’d had a tough day with the heat and the amount on climbing within that 100 mile ride…and Andy G apparently blew spectacularly with the climb out of La Santa to go. It was a 2-Magnum day, a record he reckons, but still working at about 2000kcal deficit! A  lack of calories of that scale really can’t be rectified  with ice-cream and jelly snakes, as he discovered ,so it was tough going to get home.

But he got it done…and was rewarded by a splendid BBQ dinner…and a good amount of ribbing from his ride buddies, of course.