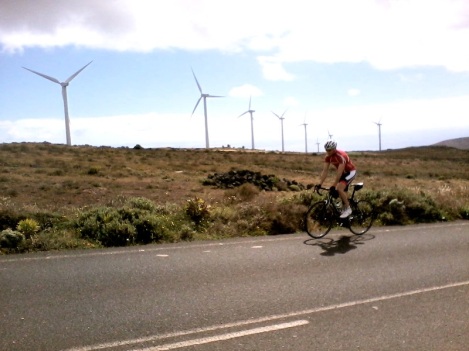 Jo was pleased that so many campers elected to take up the option of a longer swim this morning and join for a 6:45am start to the day. It was “just about” light, and the group enjoyed the spectacle of the sunrise from the water. The rest of the group did a short warm up swim, meeting up with them at the end of their loop. This morning’s scheduled swim session is probably the most intense bit of work on the camp – swim starts and exits – and this morning, with the low tide, the buoy we use was much closer to shore. It made the whole event more fun as there was very little swimming distance involved and it really meant that the quality of your running into the water and negotiating the surf was key. It certainly helped the taller you were! We started with everyone in a very small pen and raced in, around the buoy, and back out. Most were doubled up from this 1- minute sprint effort.  First out was our masseuse Rob, who is an ex-rugby player and that probably helped with this sort of racing. This initial effort meant he was paired with the slowest (last out)  for the relay. By fluke (or rather a result of Jo’s short legs and shocking body surfing skills) Jo and I were paired, and so in the 2 x three lap relay race which followed, we were leading up until the last leg, but were eventually out done by the super-competitive Lance and Matthew combo.

Todays ride was round the beautiful north of the Island on the Ironman route with a detour down to Orzola. This ride enabled the athletes who have signed up for the Ironman here in May, but as yet unfamiliar with the course, to ride a significant portion of the race route: the hilly bit. The weather was perfect with only a light wind, and we also managed the timing well so that our  two groups met up at the top of Mirador del Haria. We offered a shorter ride option ( for thsoe who had earned a “wild card” yesterday) which was declined by all, and in fact every single camper ( with a little peer pressure in one or two cases)  chose the option of riding home via the Tabeyesco climb and thus earning a wildcard for use tomorrow.  This allows them to avoid Femes tomorrow should they chose. Steven’s faster group needed a two-coffee stop at the top to refuel which allowed Jo’s group to pass them and resulted both coming together down the donkey track. It’s great when the timings work that the whole camp finishes the ride more or less together.

With the exception of those who played their wild cards, all todays runs were “off the bike”, but the athlete who most impressed the coaches today was Linda, who was out on the run like a flash. When we saw her on her way back home she explained that she’d had to be quick in order to be back in time for Happy Hour at the hotel bar! Several campers went longer than the minimum 30 minutes but most were done at the end of their 6 or 7 hour day in time for the second half of happy hour, and relaxed with a beer whilst standing thigh-deep in the cold pool discussing the days events.

This entry was posted in Camps, Lanza 2013 and tagged Lanzarote, Training Camp. Bookmark the permalink.