Day One on camp now complete -a fun day’s training and out first real chance to get to know the athletes’ strengths and characters! As usual, our first day is relatively short – a nice 30 steady minute swim so that everyone can get used to being in open water and their wetsuits for the first time since last summer for most – and for Kristen the first time ever! The chilly salt water and waves will take a little adjusting to for her, but she was totally un-fazed by the experience and I do expect that with this attitude we’ll see her gaining confidence quite rapidly. 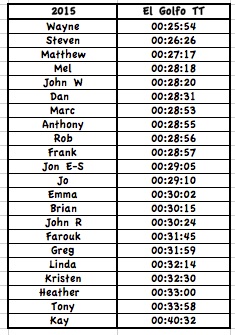 Our ride, not long but as always we start with a bang and include our standard10-mile time trail around El Golfo Loop – followed by coffees and then a return route over Fire Mountain for ~100km ride. Conditions for the time trial this year were not exactly great, with moderate winds against us in the last 1/3rd of the course, which is where the bigger hills are too – but not the worst we’ve raced (an average time was 25 seconds slower than the historical average). So no records taken, despite some very impressive performances. We knew that Wayne would smash it – which he did taking the win in a time of 25:54 – and Mel can always be counted on to impress …finishing with the fourth fastest time of 28:18. Seven of the guys all finished within 40 seconds of one another…which will make for some great racing on handicap up Tabeysaco later in the week.

We ran as a few separate groups- most people taking the opportunity to extend beyond the camp minimum 30 minutes, up to 21km in the case of Steven and Matthew egging one another on…whilst Linda ran 1hr45 right off the under her volition!

This entry was posted in Camps, Lanza 2015 and tagged Lanzarote, Training Camp. Bookmark the permalink.