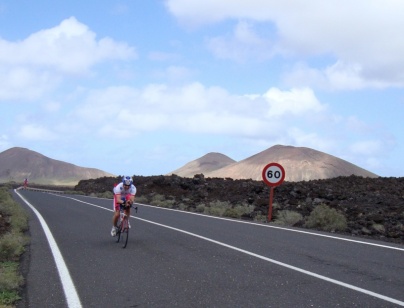 The day started with a surprise: rain! As we peered out of our apartment into the dark, the silhouettes of palm trees shook violently in the winds that had grown in force through the night, and the ground glistened  with a reasonably heavy fall of raindrops. Fortunately by the time our neoprene clad campers, keen as mustard, were assembled for our morning swim the rain had stopped and the wind given the impression of having died down. It was a beautiful morning for a sea swim – calm waters and orange pink sky. Most of the athletes on the camp are strong swimmers ,with one or two apparently able to hang reasonably comfortably on Steven’s feet, and the others providing feet for me to swim on! I had a nice leisurely morning swimming behind the group as we made out way around out ‘standard’ 1.8km loop. Those of us taking our time were able to observe a large sting ray cruising around the ‘reef’ and a rainbow above us as we came out of the water.

Breakfast buffet at the hotel went down well and, after a camp briefing every one had a half hour to get kitted up for the day’s ride. That’s everyone except for Steven and Simon, who rushed off on a mission to rent a bike for Simon to use until his own makes it’s way from Gatwick! The first day’s scheduled ride was a relatively short one –  with a time trial competition in there. We rode friendly out to El Golfo as one group ( since Steven was otherwise disposed ) various mechanical complaints becoming apparent along the way. I wonder if that has anything to do with the impending half hour of torture that a ‘sporting 10’ time trial promises? by the time we’d completed our ( windy!! ) recon lap of the El Golfo loop, Steven and simon were waiting for us on the start line – Simon on a fairly decent looking hire bike. I set the guys off at 1minute intervals in reverse alphabetical order – and we had some impressive times around that tough course. It was great to see that everyone got stuck right in  -even Roz, who’d lost her gears was stuck in her seldom used small chain-ring. Not much of a surprise that Brett took it out in 25:22, then we had  Kevin in second (25:58) and Jon 3rd (26:27). Mel pipped Emma by 4 seconds with a 29:17 standing her i 6th place overall. For comparison, Steven’s ride was 27:03, producing an average power of 331 Watts, 332 Normalised. I got out of it (clever me!) by timing. We were pleased that most of the camp took up the opportunity to extend the day’s ride by returning via Fire Mountain, not only as a demonstration of enthusiasm, but also a chance to establish pace similarities and variance amongst the group.

The day’s run had been intended as an easy 45min group run on the cliff path to the west of the town, and to be fair, I did start with 9 runners. We wove through the old town at a light pace, and then hit the multiple steps of steps that take us onto the scenic path. By the time we made our turn-around 6 of us remained, with some of the others taking the 30min run minimum literally in order to save the legs for the week ahead. That they’d run through all the toughest sections of the route is admirable ;o) and now they do know the way to the start of that path for their own run training. We found that the majority would have preferred to run immediately off the bike, and since some would have chosen to run a flat smooth path rather than trail with tired legs, and so for the rest of the camp it’s expected that run training will be done in smaller independent groups – although both Steven and  I will offer a ‘lead’ run each day for those who like to run with, or just have a chat to, us!

This entry was posted in Camps, Lanza 2011 and tagged Lanzarote, Training Camp. Bookmark the permalink.