King Of The Volcanoes Camp – Day 6

In all our previous camps we’ve made the last day a big day out for everyone with at least the full Ironman route being a requirement for completion. With the change in format we’d decided to alter the final day. Instead we made Thursday a hard day with two TTs and then our idea for the last day was to have the grand finale TT, then get together at the top of Haria for provisional results over lunch all together, before heading back for a more relaxed final day. We had certainly mis-judged the sort of athlete that comes on our camps!

Pretty much everyone wanted to do the full Ironman route with several wanting our Ironman + route. So despite that hard day on Thursday and the fact that we still needed to round off the KOV competition with a time trial at up Haria (which would be at about the halfway point of the ride) we had all but 3 campers heading out to complete the Ironman route.

Emma lead the first group off at 7:30am to give them plenty of time to get round and allow time for stops. The other two groups both aimed to have a quick breakfast and leave by 8:30. Jo lead the medium-paced group around the Ironman course whilst Steven took the faster group who wold be doing our “Ironman Plus” course (which adds on Femes down to Playa Blanca and at the top of the Island goes to Orzola).

Out on the road it was pretty clear that the winds were very strong and what laid ahead of us would be the toughest final day we’ve had on camp. Steven’s group took it in turns up from Playa Blanca but then round El Golfo, Ashley, on his TT bike, kindly sat on the front for a good 10k giving everyone a good tow. Over Fire Mountain was brutal, the fast guys only managing about 11 kph with Matthew busting a gut on the front. Jo suffered a broken chain at that point in the ride, bringing Russel to the ground as she came to a dead stop right in front of his wheel. The ground is not soft in Lanzarote!! But fortunately Russel was fine to continue with just sore hands from the fall, and Jo’s chain repair was a just a 7 minute job – the most difficult part was holding the bike still against the winds whilst she fixed it on the roadside!

It was apparent that about the only group that could make our target time for the TT was Emma’s group, who had worked very well together with Emma and Super-Domestique for the reigning  Queen  of the Volcanoes, karen’s husband Rob  taking the front at a steady pace and blocking the wind for Karen and Sheryl ( the latter was on her first every attempt at 100miles!) This meant they had some extra time and were able to have a proper stop in Teguise. Jo’s  and Steven’s group managed to meet on the road a few KMs to the TT start where Emmas group were racing… so there was actually very little lost time in the complicated logistical exercise of bringing the 3 groups together to give a proper handicap start.

There were a few comments about how harsh it was to have a TT at the halfway point in the Ironman route. Luckily our campers are tough and no one really complained. Steven went up first and took timings at the top witnessing how much effort everyone put in. Steve Wynne crossed the line first with Karen not much behind but not quite catching him. It was, however, enough to hold everyone else at bay and secure the first EverydayTraining Queen Of The Mountains Jersey. A fantastic effort demonstrating how well she’s paced herself through the camp, since any decline in perfomance on the TTs later in camp has a huge impact on your score.

Here are the final points:

It was fun to be able to regroup everyone on the last day. Something we’ve not managed before and perhaps won’t manage again as I’m not sure we’d inflict a TT on campers again in the middle of the Ironman Route! Every briefly exchanged banter at the top before the groups reformed to continue on the route.

Luckily for us all the wind didn’t change direction or reduce in strength so the whole camp and a fantastic wind assisted return. Everyone ended up with between 7.5 and 8.5 hours in the saddle and 170-190km (we didn’t do the town section of the route). These big final days certainly make for a great buzz as we give the final camp briefing, announce the winner &  present her the jersey – and Steven entertains us all with the statistical data from the camp. At this point it appeared that the average total training hours for (those who have completed the camp)  was 29hrs 50minutes….so just short of the usual “30 hours” that we’ve always said was the minimum required to complete one of our Classic Endurance camps (with the compulsory swim and runs). At this point, to our delight, Ashley and Russell revealed that they’d risen extra early in the morning to fit in a 50 minute jog before their breakfast – tipping the average hours to just over 30!! Fair play to them – we were super impressed with that.

Despite a lot of fatigue,  there was no holding back on the last night dance floor based celebrations at Route 66 – the real Grande Finale of a fun week with a great bunch of athletes. 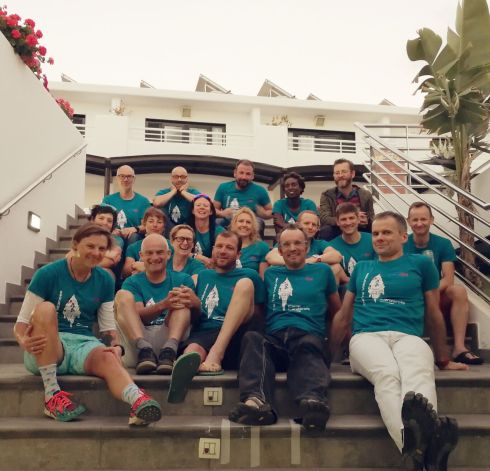 This entry was posted in Lanza KOV 2018 and tagged KOVcamplanza2018, Lanzarote, Training Camp. Bookmark the permalink.

1 Response to King Of The Volcanoes Camp – Day 6