King Of The Volcanoes Camp – Day 2

Our second day started much as the first: a pleasing majority decided to rise early for a pre-breakfast swim, and we did the same ~1500m lap in very calm conditions yet again – long may this last!!

Today’s ride committed everyone to a long one, even the most direct routes there and back would amount to 112km, and the K.O.V climb for the day was the toughest of the week – from Orzola at sea level to Mirador Del Rio at ~450m.

We staggered the start of the ride for different pace groups with the aim of converging at the north of the island within 5-10 minutes of one another – this worked pretty well with with Jo and Emma leading out a large “mid-paced’ group about 20 minutes after the first riders off, and Steven’s fast group taking a slightly longer route about 5 minutes after that.   We were pleased to have discovered, on our recce rides last week, that the old service road which runs parallel to the LZ1 has had a brand new smooth road surface laid, making it a really great option for cyclists to avoid riding the shoulder of the highway, as we used to have to…. this made the journey a little easier and a lot more pleasant – so it was really just the headwinds to contend with!  A great opportunity to practice our group rotation skills – which we got pretty slick at over the 15km up to Arrietta. Steven’s gang passed us, having done their own chain ganging along the spine road,  just before this brief ice-cream stop at the garage, and I reckon they were surely impressed!

50km in, all riders assembled at Orzola, where some had time to enjoy another refreshment break prior to setting riders off on the 10km climb, this time off handicap (rounded to the nearest 30 seconds). The ride leaders/time keepers are the exception here, so Steven rides first followed by Emma – who we started with a smaller time gap than Steven expected “for motivational purposes” which worked as Steven felt sure Emma was catching him for the first few KM of the climb –  the riders in handicap starting with Karen, and James (fastest on yesterday’s climb) 18:30 later. As start timer, Jo set off last  (actually, alongside James) and had the whole field to chase down.

It was clear that with the handicapping system in place, and everyone realising that their actual time was of little importance, and it was the number of people that they passed/were passed by on the way that was relevant, was motivational as we had some great rides through the field. The results can be seen right.

The groups then rode along the Ironman route in reverse to Haria where we all regrouped for a well earned coffee. The route in this direction affords superb views of the awesome cliffs on the north east side of the Island.

Following the stop their were only two takers for extending the ride – so Rob and James headed off with Emma for some additional KMs, whilst the rest headed up over Mirador del Haria and down the spine road with a very helpful tailwind home. Only a few people headed out for a run. It’s very interesting to see just how motivating the idea of camp completion is … without it far fewer runs are done.

With all the results put in to the camp database we found there had been a chance of leadership by just one point. Tomorrow the camp will be lead by a “Queen Of The Volcanoes” – Jo. 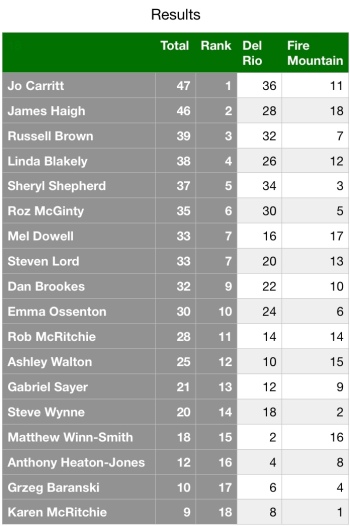 This entry was posted in Lanza KOV 2018 and tagged KOVcamplanza2018, Lanzarote, Training Camp. Bookmark the permalink.

1 Response to King Of The Volcanoes Camp – Day 2