Another 7am start for the chance to swim the Ironman course. We still have campers that are not only training hard but managing to enjoy a little bit of the night life Puerto Del Carmen has to offer. I think the early morning cold water swimming helps recovery from any excess from the night before!

We had two groups – one headed off with Jo to swim a loop of the Ironman course and a group with me who were practising sighting for tomorrows handicap swim race.

Many campers commented to me that they had been worrying about today – the Tabeyesco Time Trial. Today was a tough day for getting out there with very strong winds. I was with the first group out and as we headed up to Tias and across through San Bartelome we were hit by some very strong cross winds and gusts. Every lorry or bus that went by had us hanging on. We got organised along the LZ1 with the guys that had dropped down a group to save their legs sitting in the wind sheltering the other riders. Their idea of an easy ride out rather flawed ! For an easy ride it’s not best to be the strongest rider in a group.

Jo was leading the fast guys and as they were about to set off Matthew realised his frame was cracked and headed off for a hire bike. He got one but didn’t realise we were taking the easiest route to Tabeyesco and instead headed up and along the spine road in to the worst of the wind all on his own. He still gave a good effort up the TT meeting us all at the cafe. 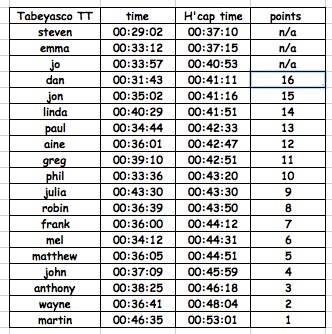 At the bottom of the climb the ladies donned their super hero pants – a tradition that started years ago when Jo first met Emma at Wensleydale triathlon. Emma was riding as Wonder Woman. Linda was particularly impressive – batman pants, batman utility belt and batman arms. We all set off at 30s intervals with the order based on the El Golfo time trial. Conditions weren’t as good as last year but the very strong wind certainly was helpful. For me it provides great motivation for a good time as I have loads of people up the road at 30s gaps. It is also really nice to be able to give encouragement to most campers as I pass them on the way up. Even on day four people are able to give it a good effort. Last year Dan, on his first camp, was flaked out in a  field ahead of the TT and it was all he could do to ride up. This time he gave is a big big effort and managed to get a sub 32 minute time and the 5th fastest person we’ve had. Seeing him cross the line we knew he’d given it his all. Another notable performance was Martin who gave it so much he needed helping off his bike at the top.

Dan’s effort was not only the fastest campers time but also fastest on handicap. This means he leads the camp points competition and also wins a Guru Bike fit from Ten Point Triathlon who have kindly continued to sponsor our camps since the very beginning.

Following a leisurely lunch at the top of Mirador Haria a small group headed off with me for the longer ride. The rest left before us with jo and Emma to ride straight home. We were all rather confused when we regrouped in Teguise and watched them all ride by – how had we passed them ? It turns out they’d had an adhoc repeat of the Castle climb from last year. 1km all up! This year it was so windy that a couple were quite literally blown off the road.

Many campers had earned a wild card yesterday so they could get back and just relax tonight. The rest headed straight you for brick runs. Notable that only Jon and Jo ran more than the 30 minute minimum. Very impressive for Jon to head out with jo for a 13k off road run at this stage in the camp.

This entry was posted in Camps, Lanza 2016 and tagged Lanzarote, Training Camp. Bookmark the permalink.