Our second swim training of the camp was focused around “starts and turns” – practice of race skills required for open water racing; beach entry, exit, mass starts and turning round a buoy in a group. We positioned our turn buoy ( the trusty ”orange donut”, now 4 years old!) just 25m or so from the shore, and we soon discovered that just about everyone in the group is capable of sprinting that distance at about the same speed! The effect was some very realistic race situation “argy bargy” and, Steven says one of the roughest mass starts he’s ever experienced through his racing career! Great fun and also great opportunity for those less confident with this aspect of racing to practice in a safe and friendly environment. After a short individual out and back race, we paired up for a 3-lap relay. High intensity stuff! Franks and Steven proved to be the winning pairing on the day by a narrow margin thanks to a a bit of leg pulling and ducking along the way. As the stand out fastest swimmer in the group, Steven does tend to attract that!

This fun and games was followed by a longish ride, and one of our favourite routes travelling all teh way to the northern most tip of the island by way of the long drag, typically into a headwind, up the LZ1 before picking up the scenic coastal road to Orzola,  tackling the long steady climb to Mirador del Rio and enjoying the stunning scenery on the descent from that hill top which people rarely ride since it’s the reverse of the Ironman route. It was a bit of a shame that I did not realise that Heather had punctured and as a result was dropped from the back of our group prior to hitting the LZ1  – riding with Emma the two of them together had little chance of catching our larger group as we worked together doing short turns all the way to Orzola. Perhaps in future we might invest in walkie -talkies between the ride leaders!

However, with the exception of these two and Ellen who was doing her own shorter ride today, the other groups both converged on the switchbacks to Mirador del Haria for coffee before making decisions as to whether they preferred to ride the day’s “standard” 70mile route or a longer option to take them via Pro Bike for various mechanical repairs.

We did our own choice of running after the various groups returned..some played their “wild cards”, some went out straight off the bike and a few, including myself, decided to have a little break and run later in the afternoon. Special note was made of Stephen who is really getting into the spirit of the camp and the Wild Cards system in particular – he was enjoying a cold pint of the amber recovery in the bar having earned himself a day off with yesterday’s hour-long run, when it was brought to his attention that a certain camper was feeling a wee bit jaded and could really use his wildcard. Without hesitation, this true gentleman handed over his WildCard, finished his pint and set out for a 30 minutes run. :o)

The day wrapped up with a nice gentle stretching session lead by Ali ( Mils physio)  – though you might have thought we were being subjected some form of contortion-based torture if you’ve heard some of the groans and moans coming from these tough guys! 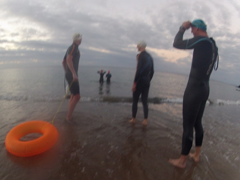