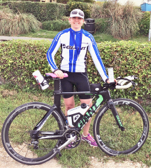 Well, the 2013 race season is now well underway and it has been such a busy weekend for EverydayTraining athletes that it requires a full page of results!

Ironman Lanzarote has been a long standing favourite race for EverydayTraining coaches and athletes alike, and this year was no exception, with seven of our guys out there on Saturday.

The following day back in Blighty, a number of our London based athletes took part in the Crystal Palace Sprint Tritahlon, competing for Tri London’s club championship.

Olivia Hetreed, carried home her usual prize of 1st Vet (and second fastest Tri London woman) thanks to a finish time of 1:19:23,  Lucy Sterne not far behind her in 1:23:00 whilst Ian Barnard  made a significant improvement over previous years crossing the line in 1:23:26

Further afield Roz was faced with severe Cornish weather and course contingency plans at the Marazion Middle Distance triathlon, which became a duathlon…..the sun shone on the day and Roz finished 3rd female, 2nd vet in 4:46. It should be noted that this crazy creature also rode her first 100mile TT the previous weekend in 5hr 26!!

Anthony Weaver was down in the New forest for their “sort -of-olympic” distance race, placing a solid 9th in his age group by just squeezing in under 2:30.

Meanwhile, Matthew Winn-Smith ran an ultra marathon this weekend – he was 3rd in 7hours 45 at the North Downs Way 50miler.

And for the next few months there will be plenty more to follow, with athletes racing in the World Long Distance Championships, Ironman 70.3UK, Dambuster, Windsor and other Olympic Distance races, Challenge Roth, Ironman UK and The Etape de Tour – to name only a few of them!

This entry was posted in Racing. Bookmark the permalink.